The CHIREN  has an extensive library of the “energetic signatures”
of the different flowers and herbs.

By means of this modern and developed instrument, the CHIREN®, it is  possible to measure in 120 different acupuncture points (located in the fingers and toes) the energy of the different systems and energy meridians of the body.

A therapist also assess the personal experiences, perceptions and feelings of the client. Since our bodies are a  whole,  all the parts need to be taken in account, not only the physical symptoms.

Only after obtaining first a general and global picture is it possible to start with the actual work which involves the neutralization and cleansing of damaging and disturbing toxins, viruses, substances, bacteria, radiation, and so on.

Basically, the Chiren applies opposite vibrations to the one creating the disturbance.

Cells not only radiate light, but also absorb it and store it. Cells contain biophotons (bio: life, photon: a single particle of light). 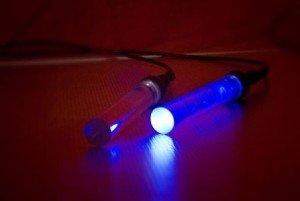 With the Chiren™, the chaotic radiation is separated, inverted and re-introduced into the body where it meets its opposite and thus neutralizes itself.

As a result, only coherent (healthy) radiation remains. This is done by holding two glass rods or placing your bare feet on glass plates specifically made for these treatments with the CHIREN®.

The electromagnetic waves containing the different frequencies (laser light) are transmitted through these glass elements .

Therapy not only helps the body to be able to work optimally, but can also affect one on an emotional, mental and spiritual level.

The Chiren™ also offers the possibility of transmitting the electromagnetic waves with the frequencies of supportive homeopathic remedies as well as Bach and Australian Bush flowers.
The CHIREN™  has an extensive library of the “energetic signatures” of the different flowers and herbs.
The use of homeopathic and flower remedies support and help in the subtle emotional and spiritual levels of a person’s life providing in this way a more holistic approach towards healing.

The CHIREN™ offers the possibility of transmitting the electromagnetic waves with the frequencies of supportive homeopathic remedies as well as Bach and Australian Bush Flower Essences.