By: Sandra Levarek Published in HolisticHealingNews.com  –
How The CHIREN™ Instrument Works

BioPhoton/BioCoherency Light Therapy is completely non-intrusive, comfortable and safe by finding and eliminating causes of a disorder correcting disturbances on the level of through the medium of light and information. Restoring “the software” that runs all systems in your body, at last enabling it to carry out its own healing process the body begins to recover from such disturbances. At the end of this process, all symptoms disappear on their own, and the body’s innate ability to recover from illnesses is restored.

An important factor to realize is that it is always your own body that does the healing once such disturbing causes have been removed.

Meridians are “energy highways” that run on the surface of the body and end on the hands and feet. With the CHIREN™ , we measure the light coherence of 100 meridian points on your hands and feet using a blunt measuring probe. (No needles are involved!!!) These objective, reproducible measurements are visible on the screen as well as audible. Since meridian points correspond with particular organs, each of these points tells us about the condition of a specific part of your body. The CHIREN™ also enables the therapist to test for the exact remedies that cancel out the disturbance of each point. Later in the session during the treatment phase, the CHIREN™ will be used in therapy mode to deliver the chosen remedies.

Treatment with the CHIREN™:

Once the remedies have been identified which restore coherency on every point, there is a 10 minute treatment using the frequencies of those remedies.

The treatment is delivered through two glass rods that you hold in your hands. The CHIREN™ amplifies and feeds your healthy, coherent light back to you. But even more importantly, it cancels out all the incoherent frequencies found during the measuring and testing phase. Because it operates on a feedback loop, it is impossible for the CHIREN™ to cause any adverse effects!

When the body is no longer bothered by the disturbances, it begins to balance and heal itself. The process is repeated with a short treatment (2 minutes), followed by a 16-minute treatment using glass footplates.

Each segment of the treatment serves a different purpose, and each treatment is custom-tailored to the individual. The session lasts about one and a half hours and is entirely safe, non-invasive, comfortable and usually very relaxing. The second session takes place three to five days later. It is important to space the first three treatments three to five days apart to avoid backtracking. After that, one per week is ideal, until no more incoherent meridian points are left, and the client is symptom-free.

Once begun, it is important to follow through with the light therapy to its conclusion for lasting results. Once the results are achieved, no further treatment is needed.

What is the difference between this therapy and others?

The CHIREN™ measures the Voll electro-acupuncture points on the hands and feet pretty much in the same way that several other therapeutic instruments do. However, this is where the similarity ends. The CHIREN™ is the only instrument that delivers the therapy in the form of coherent light, and doing this as a feedback loop. 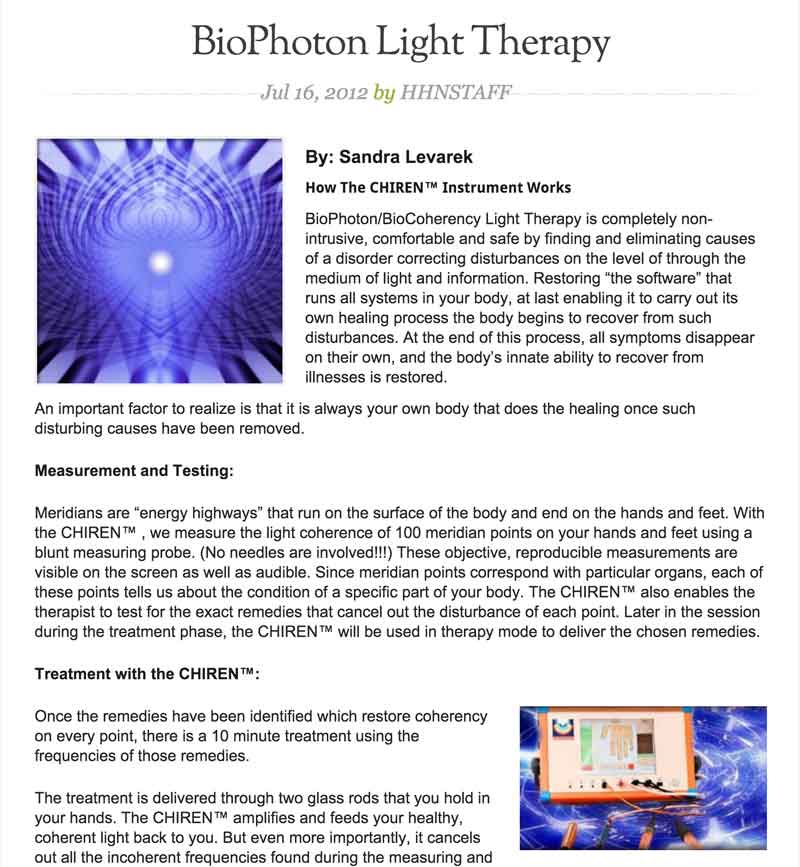 This has two very important advantages:

Light can carry much higher octaves of information than electric current (often used by most other therapeutic devices), this technology corrects emotional and mental components of health problems as well as their physical components. What this means is biophoton light therapy vastly improves the emotional and mental of ones physical health. The CHIREN™ is completely safe because therapeutic light is administered via a feedback loop which self-regulates according to the body’s needs. Therefore there is absolutely no chance of any harm.

Some persons feel tired for about a day or experience some symptoms of detoxification, usually quite mild. Others times you may experience no symptoms at all. In either case, it is important that you drink plenty of water to help the kidneys remove the released toxins. We advise you to drink at least two liters of water a day for two to three days after treatment. If you drink too little you may get a headache. Do remember that treatments rectify the information systems of your body: the actual physical healing is a process that takes place between treatments, when you are at home.

The CHIREN™ device, brain-child of Dutch physicist Dr. Johan Boswinkel, has helped many people in Norway, The Netherlands and other European countries as well as in the United States. The science of Biontology is taught in a Masters program at the University of Graaz, Austria.

In today’s world vaccinations, medications, food poisoning, childhood illnesses, surgical scars, electromagnetic frequencies, inhaled and ingested toxins and many other factors confuse and overwhelm our immune systems, creating all of the chronic health problems that are common in our society. Biontology is the science of sorting through the multiple layers of causes. CHIREN™ Light Therapy is the process of canceling them out leaving the body with its original pristine healing intelligence and an immune system not compromised, ready and able to handle anything.  Such goal is attainable with a course of CHIREN™ treatments.

How Many Treatments Do You Need? What is the cost?

The number of appointments you need depends on several factors, including:

Usually it will not be clear until the third or fourth appointment how many approximately will be required. Some disturbances may not come to light until another has been cleared up. In any case, the therapy is not a prolonged process, but a concise and clear method of treatment.

Therapy is complete when all meridian points achieve coherence and when you feel well.

Sandra lives in beautiful Sedona, Arizona and practices as a Biontologist therapist under the guidance of Johan Boswinkel through the Institute of Applied Biophoton Sciences.

Having long followed the work of her uncle, Dr. Douglas Cook, who has been working with meridian energies in his field of dentistry over the past 30 years, Sandra’s interest was so influenced from his work. His work on the energetic energy relationship between the teeth and the body has always fascinated her. She worked with his site to bring these new findings online to the public: www.dentistryhealth.com  His work with removing heavy metals affecting the meridians of the body fascinated her then as much as it does today working with the CHIREN.  What she has witnessed in his great work today  has motivated her in my present study as a Biontologist.

Sandra received her certification as a Bach Flower Therapist in the 80’s, and her passion for energetic medicine evolved to her present study with Biophoton Light Therapy where she is witnessing one “miracle” after another!