Glyphosate: A Root Cause of Chronic Inflammation?

That breadbasket people love to dig into in their favorite restaurants? If the bread is not organic, it is likely soaked in glyphosate.

The weed killer, the active ingredient in RoundUp®, was first patented and introduced by Monsanto in 1974 for

agricultural use. Later it was marketed to consumers as a household herbicide. It is sprayed in staggering quantities on most commercially grown staple crops, including wheat, corn, soybean, beet, cotton, canola, and alfalfa.

Since last year, when the World Health Organization classified glyphosate as a “probable human carcinogen,” there has been a lot of media coverage of the potential health risks associated with the use of this herbicide.

What many people do not know is that since 1992, glyphosate has also been widely used as a “ripening agent” or desiccant on wheat and many other grains. This application stresses or kills the plants, to accelerate drying and speed the ripening of the grain immediately before harvest.

Desiccating wheat with glyphosate is particularly common in years with wet weather and has been increasing in Upper Midwestern states in the US, as well as in areas of Canada and Scotland (where the process began). This pre-harvest application means there’s even more glyphosate residue on the grain by the time it reaches market than there would be if the compound had only been used as an herbicide during the growing process.

WHAT IS TIGHT JUNCTION:

In the intestines, glyphosate is a profound zonulin stimulator. It damages the epithelial tight junction tissue on contact, weakening the barriers that protect us on the inside from the barrage of other environmental toxins to which we are exposed. Injury to the tight junction membrane in the gut can lead to intestinal permeability.

The zonulin production initiated by glyphosate exposure quickly becomes systemic; injury to the tight junction membrane in the brain can result in a breakdown of the blood-brain barrier and a host of neurological symptoms.

With the collapse of the tight junction firewalls, all organ systems go under duress. Just behind that microscopically thin layer of protection of the endothelial cells that separate you from the outside world is the gastrointestinal lymphatic tissue (GALT). The GALT is a layer of immune cells that are vigilantly standing guard to address any breach in your firewall. It is estimated that 60-70% of the immune system, and more than 80% of the antibodies that the immune system produces, originate in the GALT. 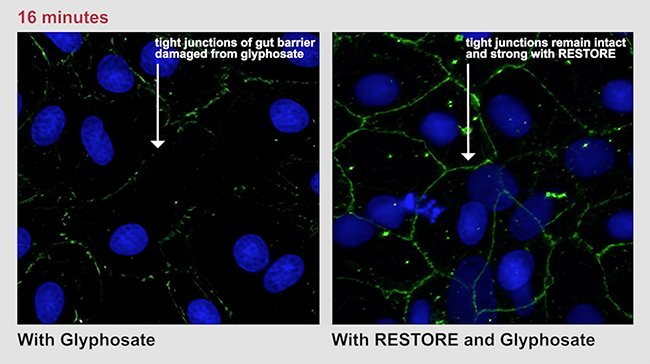 The acute inflammatory response becomes chronic inflammation as the system is overwhelmed with toxins from the outside world.

The gliadin protein in gluten also stimulates release of zonulin. I agree with William Davis, MD, author of Wheat Belly, who holds that, “When gliadin triggers zonulin release, intestinal tight junctions are disrupted, and unwanted proteins …gain entry to the bloodstream. Immune-activating lymphocytes, such as T-cells, are then triggered to begin an inflammatory process against various ‘self’ proteins, thus initiating …conditions such as celiac disease, thyroid disease, joint diseases, and asthma.”

Glyphosate enhances the damaging effects of other food-borne chemical residues and environmental toxins. Negative impact on the body is insidious and manifests slowly over time as inflammation damages cellular systems throughout the body.

“Glyphosate is dumped on us at the rate of 300 million pounds per year, almost one pound for every person in the US, according to an article in Newsweek.
Dr. Zach Bush, MD

Glyphosate’s Impact on the Nervous System: From Autism to Alzheimer’s

In 1996, New York’s attorney general sued Monsanto over the company’s use of “false and misleading advertising” about RoundUp. That case ended with Monsanto agreeing to stop calling Roundup “biodegradable,” and to pull ads claiming that Roundup was “safer than table salt,” “practically nontoxic,” and “stayed where you put it.”

Glyphosate was “classified as probably carcinogenic to humans,” according to a recent report from the International Agency for Research on Cancer (IARC), the World Health Organization’s France-based cancer research arm. 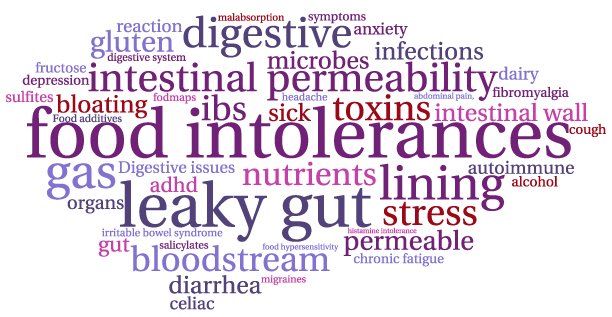 Genetically-engineered or genetically-modified organisms (GMOs) are live organisms whose genetic components have been artificially manipulated through creating unstable combinations of plant, animal, bacteria, and even viral genes that do not occur in nature, or through traditional crossbreeding methods.

In the US, 88% of the corn crop, 93% of the soybean crop, 90% of sugar beets (accounting for 54% US sugar production), and 94% of cotton are genetically engineered to be able to survive the application of glyphosate. Consequently, they can be sprayed heavily with glyphosate to control weeds and simplify harvest.

“The gliadin protein in gluten also stimulates release of zonulin. I agree with William Davis, MD, author of Wheat Belly, who holds that, “When gliadin triggers zonulin release, intestinal tight junctions are disrupted, and unwanted proteins …gain entry to the bloodstream. Immune-activating lymphocytes, such as T-cells, are then triggered to begin an inflammatory process against various ‘self’ proteins, thus initiating …conditions such as celiac disease, thyroid disease, joint diseases, and asthma.””

Looking for a place in Sedona