Pioneering herbalist Ian White talks about his passion for Australian bush flower essences, body surfing, and growing up in the magical Australian bush. 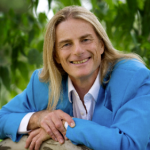 As a young boy, Ian White’s mother was convinced her son had a tumour after endless complaints of stomach pains. But this wasn’t exactly true. In pleading stomach pains, Ian had discovered the perfect excuse for getting out of school so he could spend the day out in the bush with his grandmother, learning about various plants and their healing qualities. “I told mum about 10 years ago that I was never really sick and she was quite devastated,” admits Ian. “She’d taken me to every gastrointestinal specialist in Sydney!”

Today, his so-called stomach cramps have paid off for this fifth generation herbalist. White is a pioneer in the research of the rare remedial qualities of the Australian bush flowers and plants. He has been working as a naturopath for over 35 years and with Australian bush flower essences for over 27 years. As the founder of Australian Bush Flower Essences, he now spends his time travelling the world, sharing his passion for healing and emotional wellbeing through vibrational therapy and the Australian bush flower essences range. He conducts workshops, makes regular radio and television appearances, and is also the author of five books including Happy Healthy Kids, which looks at key emotional issues and a wide variety of everyday ailments a child may face at each stage of growth, as well as solutions and appropriate Bush Essences.

What was your life like growing up?
I grew up in Terrey Hills, NSW. Our property backed onto national park, so that was my playground. I lived next door to my grandmother and, coming from a family of herbalists, as a young boy I used to feign illnesses so I wouldn’t have to go to school. I’d spend the day with my grandmother instead, her helping her to make tinctures and extracts. We go for bushwalks and she’d point out the various plants and talk about their healing qualities. It was a lovely childhood having all that access to the bush.

What’s the difference between herbs and flower essences?
In herbal medicine you’re working with roots, leaves and bark, and      prescribing with their chemical components, such as alkaloids and tannins. These are purely physical. With flower essences, you’re using the healing vibration of the plant which address emotional and spiritual aspects. The healing energetic vibration of the plant is contained within the flower, and it is the most evolved and potent part of the plant.

What is the history behind the use of flower essences? The history of flower essences can be traced back many thousands of years, in many cultures. The Aborigines utilised the healing qualities of native plants by either eating them or floating the flowers you couldn’t eat in water to extract the healing qualities. The first records of the Europeans using flower essences date from the 11th century; the Egyptians used them 3,000 years ago, and of course you have the Ayurvedic and traditional Chinese medicine philosophies that also involved treating physical symptoms by focusing on emotional imbalances, via the healing properties of plants.

How did you begin working with bush flower essences? After competing a science degree, I realised naturopathy was what I was interested in. I was working mainly as a homoeopath when a good friend told me he had bowel cancer. Every week I held a healing circle for him, and shortly after his death I started being shown pictures of plants – where to find them, what to do with them, their healing qualities and what their names were – in my meditations.

Through naturopathy I’d come across the Bach flower remedies devised by Dr Edward Bach, which were quite widely used. Based on my experiences with my grandmother, I thought, “Why isn’t someone doing it with Australian flowers?”

So that was the beginning of the Australian bush essences. I noticed that, with the Australian essences, they worked very quickly and people could really notice the difference. I thought it was going to be just for Australian people, given they were Australian plants – but in a short period of time we had people from Europe, North and South America wanting to import the remedies. It’s coming up to about 27 years now and we export to 50 countries.

How do Australian flower essences differ from other flowers of the world?
The Australian essences have got a reputation worldwide for being very quick-acting &very potent. I put that down to the fact that where the essences are made is a very pristine and pure environment. Physically and psychically, Australia is not very polluted. Australia had the first flowering plants in the world and we have the highest number of flowering plants as well. All those factors lead to the essences from Australian plants being extremely potent.

How are bush essences made?
I prepare them under ideal conditions, such as clear blue skies and away from roads, power lines, crop dusting, and things like that. The flowers are collected and put into a bowl filled with water which is then covered and left out in the sun for approximately two hours. The sun releases the healing energy of the flower, which is the most evolved part of the plant. The flowers’ healing vibration is released into the water in a homoeopathic way. The flowers are taken from that and the water is added to brandy as a preserving agent; that’s the concentrate or mother tincture which I make from all around Australia. We then bring the essences back to our office in Terrey Hills, where they are prepared down to the next dilution called the stock level.

How are bush flower essences designed to be used?
The usual dose is seven drops in the morning and seven drops at night, for two weeks. If it’s a deep-seated problem then you could take it more often, for up to a month, and then reassess.

What benefits can one expect from using bush flower essences?
Bush flower essences are very specific in dealing with common emotional states. Take the Waratah essence, for example. Waratah is used for deep despair and it’s very powerful in pulling people out of it. We have single remedies as well as combination remedies. There’s one called Cognis which is good for deadlines and if you’re feeling overwhelmed. There are also remedies for intuition, creativity, self-esteem, sexuality issues, anger, jealousy, &sibling rivalry, among many others.

What do you see as the major health issues we face today?
On a purely physical level, I see with the ageing population instances of Alzheimer’s, poor memory and
senility having a huge impact on the community. There are not going to be as many people available to provide care, because there will be so many more of them with the potential to be affected by these disorders. Obesity in kids is going to have a huge impact for diabetes and heart disease, and just general wellbeing.

And I think the general pace of life causes people to feel stressed. There’s a combination remedy called Calm and Clear for people feeling incredibly hurried and short of time.

How are the attitudes towards alternative therapies changing?
Australians are open to it. Pharmacies are employing naturopaths, the Sunday papers are full of articles on flower essences and aromatherapy and nutrition. This is unique compared to the rest of the world, Australia is definitely leading the way, plus the number of people using natural therapies here is quite high.

Do you ever go to a conventional doctor?
I go every couple of years for a general check-up. My wife is the principal harpist for  the opera and she has what’s called trigger thumb from playing the harp for many years. She had to have some minor surgery working on the sheath of the tendon. I have no problem at all with conventional medicine, especially for the diagnosis, but I wouldn’t take antibiotics. I work with natural remedies and I think if you exercise, eat well and maintain emotional wellbeing, then you are not going to end up using huge amounts of medications which have many side effects.

What I’d like to see people do is take a little more responsibility in all areas of their health. Not just their physical wellbeing but also for their emotional wellbeing, which impacts the physical. For example, if you’ve got a lot of grief and sadness in your life, then being able to address that can help you from getting bronchitis in winter. Or, if you’ve got a really short temper, then addressing that so you don’t get into arguments is going to have a huge impact on your gall bladder. Increasing the quality of your emotional wellbeing has a flow-on effect to your quality of life.

How do bush flower essences work with conventional medicine? A physical ailment can be like a tap on the shoulder that there’s something out of balance. If someone’s getting the flu all the time, then in my books there’s a cross-reference. I would ask, “What might be some of the emotional states triggering some of those imbalances?” You might want to look at more relaxation and clearing the overload. You can start by getting medicine for the symptoms but you also want to look at the emotional aspect because that’s where the real cause is. You can work quite well with both together.

When are you happiest?
I just finished a three-day teaching workshop which we only do once a year in Australia, and I think teaching and showing people about the essences is probably one of the things that I do best. The Level Three program is great because we spend a lot of time out bushwalking, and as a group we make up an essence. I really love sharing my passion about the flowers and the essences as well as being out in the bush. In springtime when there are so many flowers out, it’s just amazing. Just being out in nature and doing the work that I love, I feel very blessed. I also love body surfing. I really miss it when I’m out in western New South Wales or down in the south west of Western Australia. Last night I just came back after teaching and we had a number of friends I bodysurf with over to watch a body surfing DVD and that was great. Doing the work I do, body surfing and being with my wife, friends and family is what gives me the most joy.

1. Give yourself 20 minutes each day of meditation or quiet inner reflection (Meditation essence).

2. Have the confidence and courage to go and follow that life path and purpose (Five Corners essence).

3. Have fun, be playful and laugh a lot (Little Flannel Flower essence).

Which essence is right for you?

Waratah:
Feelings of despair and hopelessness; inability to respond to a crisis

Wedding Bush:
Difficulty with commitment; fear of being trapped; not following through on goals

Five corners:
Low self esteem; dislike of self; holding back one’s true personality; wearing clothes that are drab and colourless

Cognis:
Confusion and feelings of overwhelm

Calm and clear:
Always over committed; not time for self; feeling like the last priority

Flannel flower:
Dislike of being touched; lack of sensitivity in males; uncomfortable with intimacy